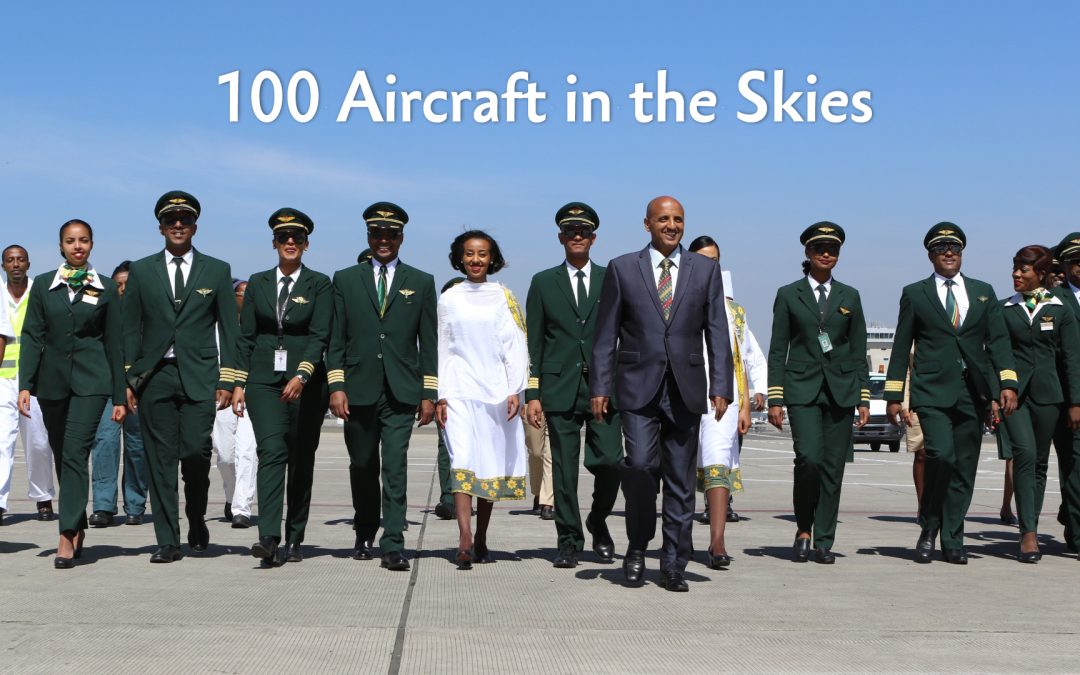 May 23, 2018, Toronto, Ontario –Ethiopian Airlines, the largest Aviation Group in Africa and SKYTRAX certified Four Star Global Airline, is pleased to announce that it will take delivery on 5 June 2018 of its 100th aircraft, a Boeing 787-900, the 1st for an African airline to operate 100 aircraft fleet in the history of the continent, thus maintaining its pioneering aviation technology leadership role and ascertaining its leadership position in all aspects of Aviation Services in the continent.

Ethiopian now operates one of the youngest and most modern 100 aircraft, with an average age of less than 5 years. Fleet modernization and expansion is one of the four critical pillars of our Vision 2025 strategic roadmap, in support of our fast expanding network, which has now reached over 110 international destinations covering 5 continents.

Our new and cutting-edge fleet composed of B787s and A350s offer unparalleled on-board comfort to our customers and offer the best possible connections when traveling within Africa and between the continent and the rest of the world.

This 100-fleet milestone, which we have achieved ahead of our Vision 2025 targets, compels us to revise our plans with a view to phase in more aircraft and further expand our network so as to meet the growing travel needs of our continent and support its economic development and integration by facilitating the flow of investment, trade and tourism. We will continue to connect more and more Africans with their fellow citizens of the continent and with their brothers and sisters in the rest of the world to make life better every single day”

Ethiopian operates a mix of state-of-the-art aircraft with an average fleet age of five years. The Airline has 5 more Boeing 787-900 and 16 Airbus A350 airplanes on order, among others. Ethiopian was the first African Airline and second only to Japan to operate the B787 Dreamliner in 2012 and the first carrier in Africa to usher with the Airbus A350 XWB in 2016.

Ethiopian Airlines (Ethiopian) is the largest growing Airline in Africa. In its seven decades of operation, Ethiopian has become one of the continent’s leading carriers, unrivalled in efficiency and operational success. Ethiopian operates the youngest and most modern fleet to 93 international destinations across five continents. Ethiopian fleet includes ultra-modern and environmentally friendly aircraft such as Airbus A350, Boeing 787, Boeing 777-300ER, Boeing 777-200LR, Boeing 777-200 Freighter, Bombardier Q-400 double cabin with an average fleet age of five years. In fact, Ethiopian is the first airline in Africa to own and operate these aircraft. The airlines operates three direct flights weekly from Toronto to Addis Ababa with connections 53 destinations Ethiopian is currently implementing a 15-year strategic plan called Vision 2025 that will see it become the leading aviation group in Africa with seven business centers: Ethiopian Domestic and Regional Airline; Ethiopian International Passenger Airline; Ethiopian Cargo; Ethiopian MRO; Ethiopian Aviation Academy; Ethiopian In-flight Catering Services; and Ethiopian Ground Service. Ethiopian is a multi-award-winning airline registering an average growth of 25% in the past seven years.